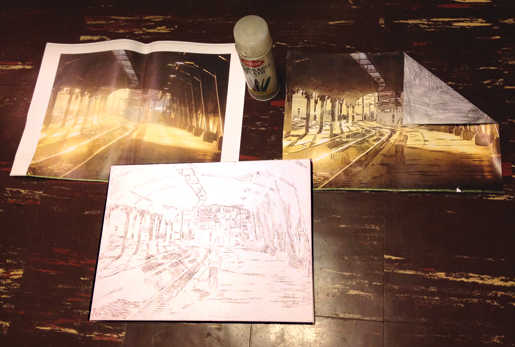 off to a slow start, but this might turn into a pretty good one

Well I finally broke down and started to work on that train station terminal painting that I blogged about in the fall. It is not that I don’t want to do it, it is just that I am really itching to do a painting that is alive with vivid colors and the three paintings that I have been working on have all been painted with very limited color palettes and I just want to bust out. This year I am going to have to remind myself to go out and take more pictures in the spring, summer and fall so I don’t have to resort to doing winter pieces which always lack color, it is sort of not fun, I might as well  just be drawing sometimes I think. Anyhow this is going to be a small painting(12×16) so hopefully it won’t take too much time, also I am going to go for a more impressionistic feel with this one as an experiment and if isn’t turning out right I can always go back to my safety net, realism. Right now I would say that my inspiration for this piece would be that series of paintings that Claude Monet did of the Rouen Cathedral, but like I said that can change as the process goes on. Yes I took those meds, that is why I am so chatty today.
In the picture above I wanted to show you how I start a painting which is I run two color proofs of the intended work both at one hundred percent, then I save one as my reference and the other one I turn over and rub a dark, soft graphite 6B pencil all over the back until there are no white spaces. From there I take that print and I  tape it around the edges of the stretched canvas using with the graphite side sitting on the canvas, then I tape the print to the canvas from the sides, so now I am ready to trace. I usually take the proper sized book and put it as backing behind the canvas so I am not tracing on a sagging canvas and then I trace out every sharp detail with a black ballpoint pen and I am good to go. Then you remote the tape, take the print of the canvas and give the graphite impression you just made a quick spray of workable fixative to seal it all and I am ready to paint.

When I start a painted work i want to make sure that I don’t cover up any of the details from the heavy pencil tracing that i put down on the canvas. The first paint cover is usually thin, so my pencil markings show through. Also, I want to make sure that in my first round of painting the colors I choose are as close to spot on as possible because that is a huge time saver if you get it right in the beginning, you have to fight the lazy urge to just get some paint down there on your first round just to make it look like something. When i first started painting, i would just put down any color that was reasonably close enough to my source material and then I would eventually pay the price later with having to go back and repaint the whole thing. You want that first overall cover with the paint to be as accurate as possible to give yourself the most visual clues. In this way you will have a firm and stable foundation for the rest of the journey. Just remember that the less guesswork you have going foreword, the more confidence you are going to have and a more enjoyable experience it will turn out to be.

9 thoughts on “The Train Station acrylic painting finally gets started”